It arrived like a silent visitor…drifting in one area – then another – and another. Sargassum seaweed. Along the south east and north coasts of the island, heaps of the seaweed (locally called ‘moss’ but not the same as seamoss) are more prominent and seen along the shoreline.

When it started rolling up on the south and west coasts where tourism is most prominent, tractors and troupes armed with rakes were sent to the shores to scoop up as many heaps as possible and dump elsewhere.

After a few days, the colour of it darkens as it’s dried by the sun, and acid is released into the atmosphere. With that comes a stench and countless clusters of tiny flies hovering over stinky heaps of seaweed brought on the sand by incoming waves at high tide.

In 2015, sargassum seaweed was a hot topic in Barbados and around The Caribbean. I wondered if many were pausing to consider that there could be a purpose for it or at the very least, a lesson to be learned from its arrival, even if that lesson was to observe our own reaction and sudden collective concern for the state of the sea and how it affected people on land.

Sargassum seaweed (called “moss” by fishing vets) has returned and is seen along some part of the island, mostly on, but not limited to, the east coast. The birds find the sargassum seaweed intriguing, sometimes swooping and sitting down on the mass, scouting around for fish and other salty appetizers. Unfortunately, turtles that swim in the waters daily and come to shore to lay their eggs seasonally aren’t able to maneuver well in it and a few years ago (on the south east) I saw 3 big dead turtles upside down in a huge patch of the weed on the south east coast. 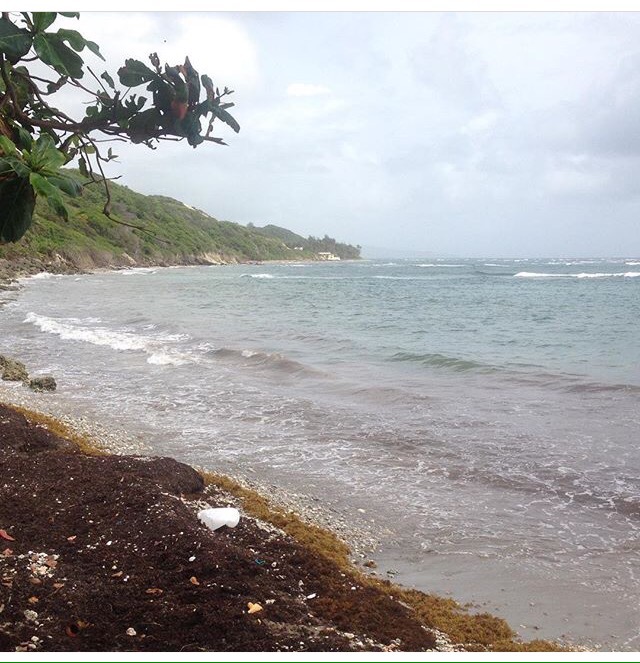 The fact that Barbados has designed itself to be economically dependent on tourism, with turquoise beaches as the attraction pitch and “calling card”, compelled communication barriers between classes and colours to be broken down, and many become proactive, sending tractors to clear several beaches and dump the seaweed elsewhere. Not exactly (or at all) a long-term solution – more of a quick fix, but – a step.

Innovative gardening enthusiasts and farmers started collecting, drying and utilizing the seaweed as a natural fertilizer to nourish the earth and combat an unwanted and resilient crop consumer – snails!

I’ve been doing some research online on the sargassum seaweed and learned it can also be a bio fuel source. Anyone have more info on this? If so, please share in a way that gets the attention of people in a position to do something about it for the good of the land and nation since scooping it up from one place to dump on another isn’t much of a solution. For years, the seaweed passed by once a year, but as of 2015 it started arriving in droves and two years after its exodus, the shrub-like swimmer returns in short stints.

Plenty beaches remain turquoise and crystal clear, but the island is so small we can’t ‘bury our heads in the sand’ and pretend we’re not aware of the ocean visitor that still affects and perplexes so many.

Here’s a blue-water beach picture for a better understanding of how the sea (from the south to west coasts) mostly looks.

Thanks for coming by and reading today’s post. If you’re inspired to help support this blog and beyond whether with a $1. today or more monthly, the PayPal email address is itsjoywithin@gmail.com – thanks very much.

One thought on “Sargassum Seaweed Around Barbados: Sightings & Possible Solutions”

Follow Joyful Life | On Purpose on WordPress.com
Join 10,384 other followers