The manchineel (also know as “beach apple,” Hippomane mancinella or ‘death apple’), is a yellowish-green fruit that is not to be eaten. Both the sap from the tree/bark/leaves and the fruit itself are poisonous and it’s not advisable to linger under the tree when it’s raining. This seaside or mangrove tree can grow as a bush or a tree, sometimes up to 50ft tall. 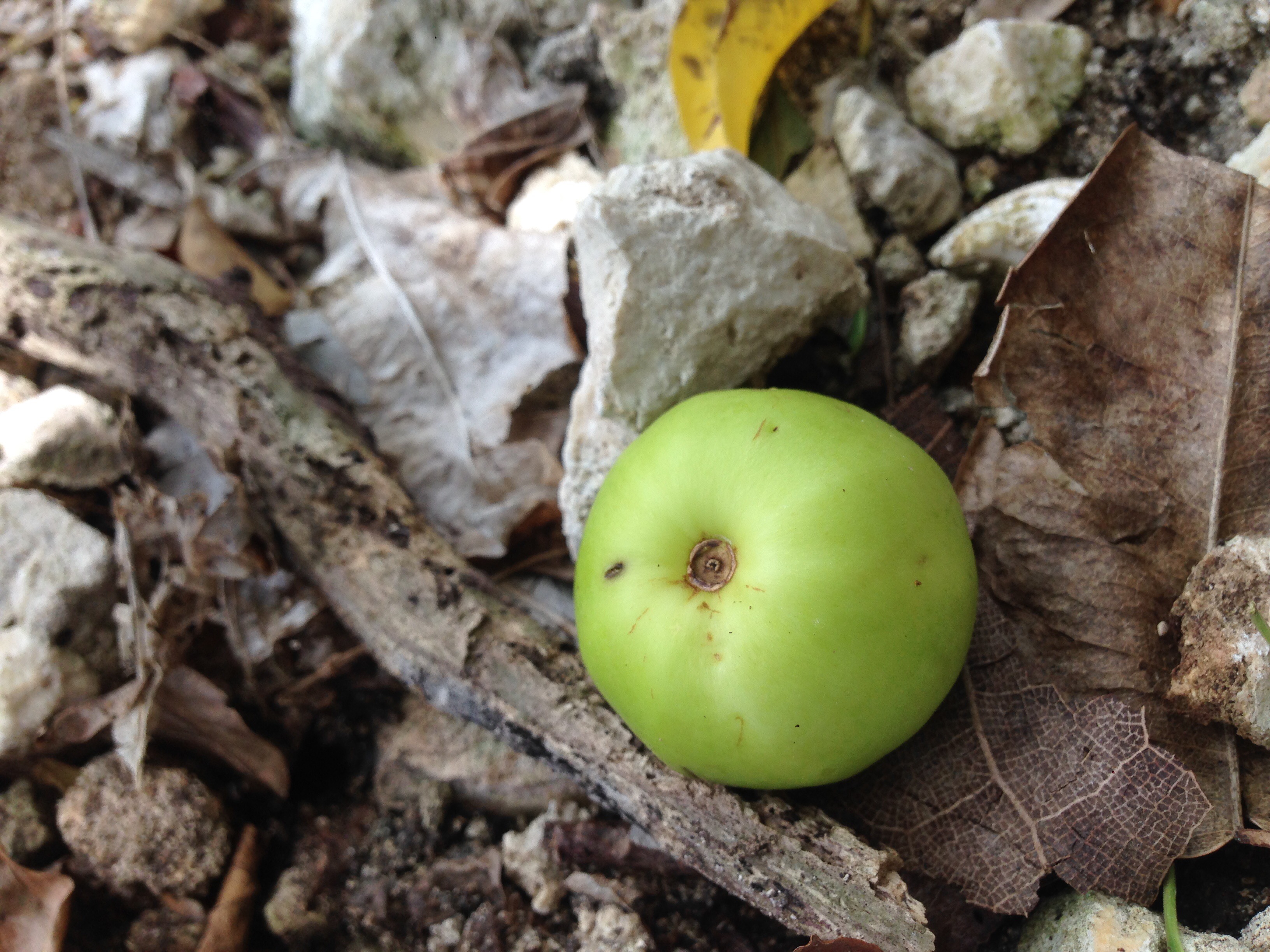 The fruit is a tough and about the size of a table-tennis ball and they drop from the tree in numbers.

Bright green fine-lined leaves from many branches often connect to form a handy canopy to provide shade and a cool spot on hot sunny days. Though this tree makes a lovely leaf umbrella, try not to lean on it or interfere with the leaves especially during or after rain.

In Barbados, many popular fishing waiting spots are under one of the many manchineel trees along the shore, but we make sure to avoid the actual fruit itself. They are regularly seen at the base of the tree or close by on the ground or sand, falling like a round missile from overhanging branches. The one on the ‘low side’ of Miami Beach (apparently officially called ‘Enterprise Beach‘) is huge and people sit under it all the time but no one eats them or stays under the tree for long when there’s heavy rain. The thick branches have to be pruned every now and then to make room on the sand to sit down. The cut branches are sturdy enough to hold a heavy beach bag if you don’t want to rest yours on the sand.

The “beach apple” is almost as popular along beaches as the sea grape waterside tree (turns out its really a seaweed) that has a much smaller and actually edible fruit. Much like mosquitoes (something that often petrifies new visitors to the island) many people from Barbados are aware of the danger of manchineels yet exist unaffected being around them although there’s no formal education or media messaging on it. Most children seem to inherently understand to stay away from the manchineel fruit while on the other hand, so many seasonal fruits are popular for the picking, from mangoes, ‘dunks,’ ‘hog’ plums and Bajan cherries, to soursop, tamarinds, paw paw, guavas and breadfruit.

For anybody visiting, I hope this info comes in handy when you’re enjoying the beaches. No need to be fearful but mind the manchineel trees, educate your little ones, plonk your towel on the golden sand – not on the fruits that line the sand. Tip: walk with a bag for any litter so the beach clean up crews have a lot less hassle keeping Barbados’ beaches clean.

Follow Joyful Life | On Purpose on WordPress.com
Join 10,384 other followers